Most stories about ageism aren’t written by the aged. This one is.
By Ramona Griggs 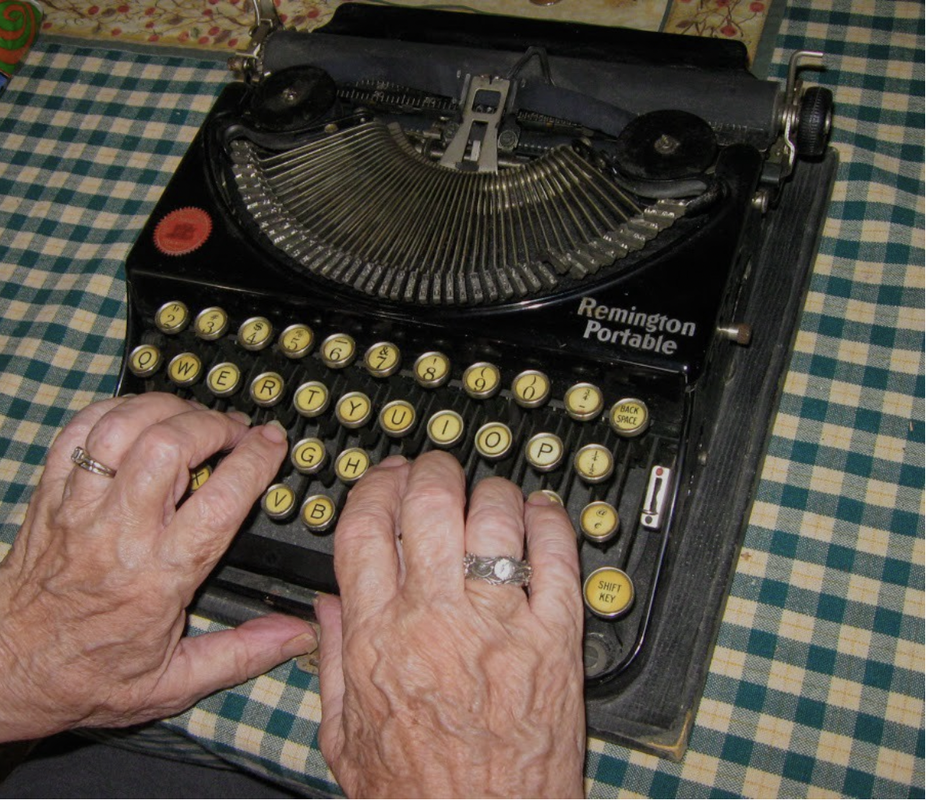 Author's hands, author's typewriter, author's photo.
As a writer and an old person, I’ve written about aging many times, but I’ve never written an entire piece about ageism itself. I’ve left it alone, I suppose because I thought it was a subject best left to the experts, but who is more expert at aging than someone who has leaped past the aging part and is now at the finish line -- the aged?

Note that ‘aged’ as regards ‘elderly’ is pronounced ‘age ed’, two syllables, and not ‘aged,’ as in, ‘ripened’.

It astonishes and often amuses my younger friends that I’m 83 and still able to stand upright and carry on a conversation. I’m like their walking, talking monument to acceptable longevity. There’s apparently a stopping point, though. When they learn that my husband, still smart, still funny, still standing, is 88, in their minds they’re already fitting him for a funeral suit. They dismiss him with a virtual undisguised pat on the head and a sad goodbye, and don’t consider it odd at all.

Those of us in our seventies, eighties, nineties, and beyond are no longer seen as viable citizens of our communities. We aren’t asked to join in or to help out, and we certainly can’t work. We’re seen as too fragile now, too precious, or too uncomfortable to be around. Our advanced age makes us different, and the truth is, we’re not surprised. We were there once ourselves. We remember what it was like to be around old people. They were no longer us. We used vague niceties and dreaded asking how they were, for fear they might tell us.

They spoke in halting sentences, trying to remember names of people or places we didn’t care about. They dragged a story on and on and were often deaf, so we had to repeat ourselves. It was exhausting.

We understand ageism. We’ve been guilty of it ourselves. But ageism, as insulting as it is, is still steps up from age discrimination. The ‘ism’ is a concept, often wrong, stubbornly popular, yet absolutely necessary to legitimize and give wings to age discrimination.

Ageism hurts; discrimination harms. It can and does become policy and it can and does directly affect our lives. It’s the hidden reason we can’t keep or hold jobs. It’s used against us in health care, in getting loans, in being able to stay in our own homes. Suddenly, no matter our education or our backgrounds, we’ve reached a point where we’re rendered dumb. Our aging brains have failed us and we’ll need keepers now.

Ageism dictates that octogenarians or nonagenarians couldn’t possibly master a cell phone, for example, or, god forbid, a computer. Do the young think we were born old? Do they think we can’t learn? We’ve been learning all our lives. We’ve got the process down pat.

Windows 1.0 came out in 1985, and a year later, when I was 49, I bought my first Windows-based computer with grant money I received to advance my writing. After fighting with MS-DOS, Windows was a miracle. I thought I would use it mainly as a word processor, but wow! It opened up worlds! I could talk to my friends on my computer! It was still basically MS-DOS based so we had to know the language for a while, but it had the advantage of WYSIWYG. And once the World Wide Web became available, we had access to the planet’s largest library. There wasn’t anything the Web didn’t know. Which meant there wasn’t anything we couldn’t know if we wanted to. It’s a myth that your grandma or grandpa can’t comprehend the internet. Millions of us were using it long before any of you were born. Our computer literacy evolved as the systems evolved. We get it.

I drafted this piece on my laptop, edited it on my iPad, and gave it one last check on my cell phone. It’s not a miracle that I can do this at my age; it’s a miracle that these resources are available to me.

There are millions of us out there who, luckily, have reached an age you can only dream about. We don’t want veneration; we want understanding. And that’s on you. Stop looking at us as ‘aged’ and look at us as fellow humans with the same dreams, the same limitations, the same frailties.

​We have much to offer. Some of us have years ahead. (I hope I’m one of them.) We want to be seen and heard and appreciated, but only on the same level. No special treatment. Just see us. Just listen. And most of us will do the same for you.
Return to Our Stories