Stuff: You Can’t Take It With You

​Your kids wouldn’t be caught dead with it.
By Judy Millar 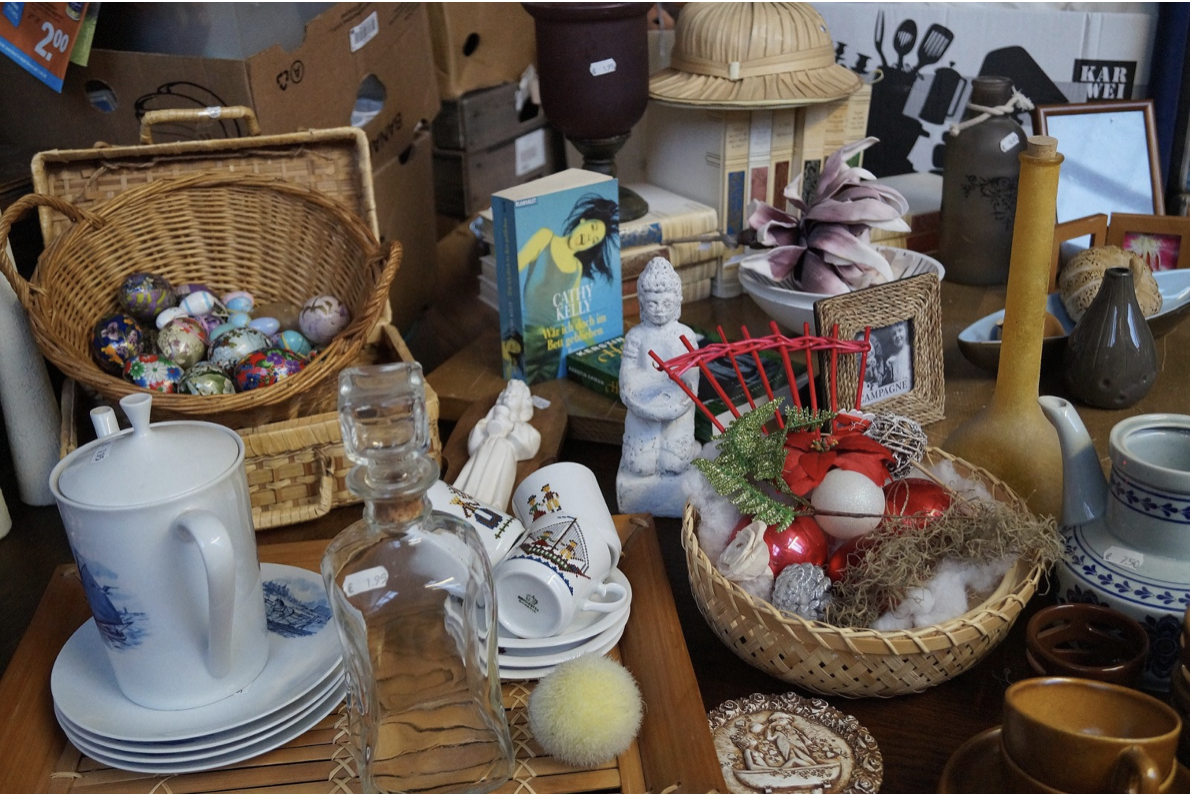 Image by M. H. from Pixabay
I’ve arrived in my seventies with SO MUCH baggage.
​
Do you want a Suzanne Somers’ ThighMaster? You’re in luck. This contraption hasn’t been compressed by my quivering thighs since circa 1990, but it regularly jams up my closet door. It’s yours for the taking — and for the quaking.

Genuine ThighMaster, Wedgwood Queeensware and assorted bric-a-brac. Photo by the author.
My kitchen cupboards are spilling over. There’s the set of Wedgwood Queensware, a wedding gift from Aunt Florence that has outlasted that marriage— and, sadly, outlasted Aunt Flo as well. The set came complete with an embossed ashtray. I quit smoking in 1981, but should the urge strike, I apparently want an ashtray at hand.

Then there’s the miniature teacup embossed with tiny shamrocks that seemed like such a find at the time. Turns out very few Irish leprechauns ever stop by for a cuppa. The dratted thing is forever getting knocked over when I reach for dessert plates.

I know it’s time to pare down. Should I pass my “treasures” along to the next generation? “Over my dead body,” says my daughter, horrified at the thought of my kitsch cluttering up her cupboards or clashing with her decor.

A friend suggests I read a book called The Gentle Art of Swedish Death Cleaning. The “D” word gives me a chill. Is that why I’ve avoided disposing of my stuff? If I clear away my clutter, will the Grim Reaper somehow be notified? I’M NOT READY!

I am also not a hoarder. Well, not exactly. I’m not as bad as Dan Regan (@Social_Mime) who recently tweeted, “One day I may need a Sega Genesis controller and a 1983 Trapper Keeper.” I am proud to say I own neither. And yet — there is a Sony Walkman with earmuff-size headphones that’s lived in my bedside table since the early 80s. Busted.

Okay, I am clearly more of a hoarder than a “tosser.” Jerry Seinfeld is a tosser. Not a tosser in the British English slang sense of being an obnoxious jerk. Jerry says he’s a tosser because “all the objects and possessions we own really just exist at different stages of becoming garbage.” He claims to love throwing out such “garbage.” In fact, he says he finds that once he has something, he no longer wants it.

Every object on earth is part of a giant, slow parade to the dumpster. — Jerry Seinfeld

Jerry would make an awesome Scandinavian death cleaner. Me, not so much. There are memories encased in my bric-a-brac that might not mean much to you, but seem to still matter to me. I was once that woman who craved Suzanne Somers-style thighs and blasted Bonnie Tyler’s “Total Eclipse of the Heart” through that Walkman. It will hurt my heart a little to let her go.
​
Still, the time has come to make a start on paring down my paraphernalia. It’s a daunting task. But today I read that renowned TV pitchman and gadget-guy, Ron Popeil, has passed away. I picture his garage — possibly stacked to the ceiling with unsold Veg-O-Matics, Hav-A-Maid Mops and Inside-the-Eggshell Egg Scramblers. Things could always be worse.