When matronhood sneaks up on you.
By Monique Barry 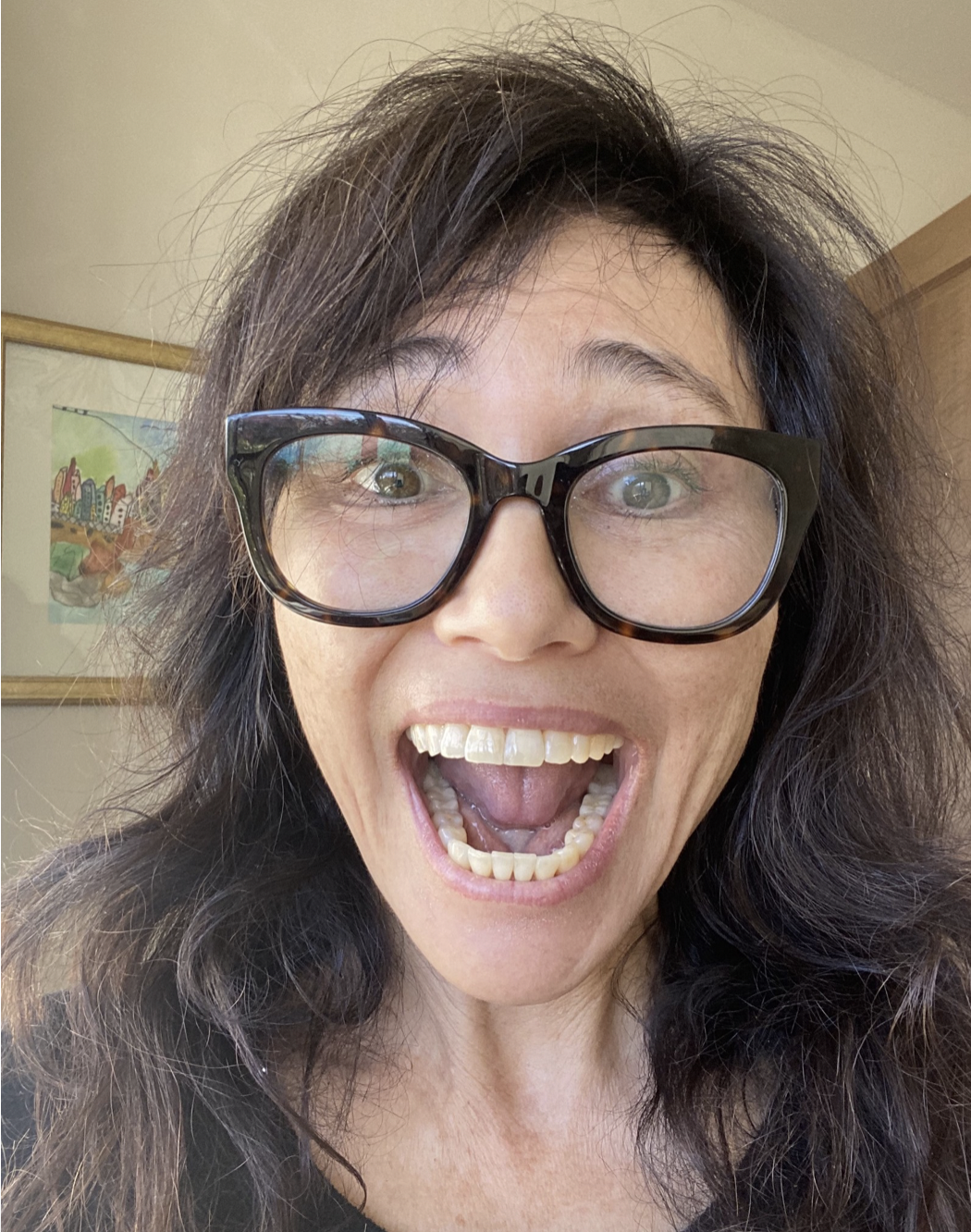 The "dry" author.
I hadn’t had a period in five months. The first few weeks were kind of nice. I could wear my white underwear. Then I kept thinking I was pregnant. That would have been a miracle on my end given I wasn’t even having sex. That’s how fertile I thought I was. And although I had just turned forty-three, I had just had a baby at age forty-two so in my delusional mind (and dimly lit vanity mirror) I believed I was more likely to get carded at a bar then run out of estrogen. Then I had the first hormone test.

Dr. Khesa, my turban-wearing, white-bearded Sikh doctor emailed me that I was peri-menopausal and that we should discuss it during my next appointment. What an asshole. Shouldn’t that news be presented in person or at least by phone?

“Hi Monique, you are supremely healthy but I’m sorry to tell you that your stint as a lady is over. You will now be moving directly into matron-hood. Prepare to lose your waistline, sex drive and any remaining wrinkle-free spots on your face. On the bright side, there’s a Chico’s on Montana and with their spring sale you’ll have plenty of cash left to drown your sorrows in chocolate and wine.”

Maybe it was better to email me the news.

I swiftly changed practices to Life Span Medicine. Lifespan was supposed to be a forward-thinking group of doctors that focused on longevity. The office didn’t look like a doctors’ office at all. It looked more like an Internet start-up that was on a month-to-month plan. The exam rooms were filled with generic office furniture that had that rent-to-own look. My new doctor was a Belgian lady who looked anything but progressive. She sported the short poofy hair my grandmother gleaned from sitting in rollers at the salon. She listened intently as I gave her a detailed medical history.

“I was on the pill for ten years in my twenties and when I went off, I didn’t get a period for over two years.”

Dr. Reid nodded knowingly as she sat back in her chair.

“And tell me, how dry is your vagina?”

She had a strong accent and a soothing voice I found reassuring even though I could only understand about two thirds of what she was saying.

“Um, I haven’t really checked. And neither has my husband. But my eyes, my eyes have been really dry,”

I could see Dr. Reid’s lip curl up slightly. Another clue.

“I think you are progesterone challenged and I suspect you have been your whole life.”

She missed her calling as a detective, or playing one on Masterpiece Theatre. After reassuring me she would have me bleeding in no time she sent me to have my blood drawn. Instead of a lab, I went to another room to sit on an office chair I could have done a job interview on. I left her office feeling young and vindicated. Me menopausal? I still wore mini skirts and listened to Arianna Grande for Christ’s sake? Ridiculous.

Two weeks later I returned to Lifespan to discuss my options. Dr. Reid greeted me with a weak smile I could only interpret as pitying.

“Turns out I was wrong. You are not perimenopausal, you are in full menopause,”

“This is very unusual for someone so young. You see these numbers?” She points to my hormone levels. “You have nothing. No estrogen, no progesterone, no testosterone. I can’t imagine how bad you must feel.”

I felt like the stump at the end of that kid’s book, The Giving Tree, no branches, no leaves, just a hard dry place for men to sit on.

“On the bright side your cholesterol is very, very good.” She offers.

I so didn’t give a shit.

And then it hit me, I hadn’t been sleeping. Every night I’d wake up at three AM burning hot.

“Our A/C is possessed,” I had insisted to Rick, “It shuts off randomly every night. How are you not feeling this?”

“What we are going to do is give you a little estrogen, a little progesterone and see what happens. I have seen this with nice ladies like you and sometimes boom! A period comes back. We never know. And if it does not, we will manage it. It won’t be bad.” She gives me estrogen gel to apply, “I am on the same gel and look at me. I’m fifty-eight!”

This was not a selling point. She looked at least sixty. But I took my gel and trudged out. I couldn’t believe this was happening to me. I wanted to comfort myself with a pepperoni pizza but my acid reflux was acting up. I was officially depressed.

I complied with her regime of estrogen three days a week and progesterone for half the month. After only a couple of days I felt remarkably better. My hot flashes had all but subsided and I was able to sleep through the night. I was singing the praises of bioidenticals and bummed that I hadn’t gone on them sooner.
Then I got a call from an old friend, Barbara. She was fifty-three and had been fighting menopause off for the past five years. In my version of Sex and the City, she was a brunette Samantha, only with five dogs. She used a similar gel initially.

“You know Mr. Cho Cho? He grew nipples from sleeping with me.” Mr. Cho Cho was a Chihuahua Schnauzer mix. “Do not use the gel. Even Dr. Khema’s seen men come in with boobs because their wife was on that stuff. Get a patch” she tells me. “You don’t want what happened to Mr. Cho Cho to happen to Ricky.”

“You probably cuddle Mr. Cho Cho more intensely than I do my husband,” I tell her.

She didn’t laugh, so I can only assume she did. I wondered how common the boob thing was, so I asked her to send me a photo of her dog’s décolletage. She didn’t have one and wouldn’t take one. Perhaps she was afraid I was planning to shame him on social media. Perhaps she was exaggerating. I decided to take my chances and stick with the gel. It’s a lower dose than the patch and my husband and I don’t cuddle anyway. It would have been too hard to keep rebuilding the wall of pillows between us I used to muffle his snoring.

A week later I was starting to feel better but then my Chinese Mom came to visit. She shuffled in wearing her tangzhuang vest, her graying black bob swinging with purpose.

Mom was eccentric and her advice was not based on any sort of research, but she did seem to have an uncanny ability of being right.

“Buy Google stock. Everybody like to say google, it fun,” said Mom back in 2015.

Chakrapani was considered a ‘National Treasure’ of his native country India because his predictions were so accurate. I wondered then because he was like a hundred years old (okay, eighty nine). The last time I saw him he fell asleep during our session. This time I came nervous and jumpy.

“Just tell me about my health.”

Chakrapani surveyed my chart for several minutes before saying, “Don’t eat too much junk food.”

Chakrapani shrugged and laughed. “Take care your health. Is all you can do. We all get older.”

He was right, and while a lot about aging sucks, I remembered being at Seattle’s Best Coffee House in Santa Monica when I was a twenty-year old college student with no money. Being relegated to drip coffee and no snacks. I went up to the counter to get my free refill and found myself waiting behind a seventy-year old woman. She didn’t seem to be ordering anything. When I peeked around her, I saw that she was systematically eating every chocolate chip cookie sample on the “With our compliments” tray at the register.

I was pissed. I wanted one of those samples. I spoke before I could stop myself. “You’re eating all the samples.”

​I guess there is something to look forward to after all. I can’t wait to not give a shit.