Must Our Sex Lives Die Before We Do?

Sex doesn’t have to stop after any age but recognizing and responding to its challenges is necessary.
By: David Mokotoff 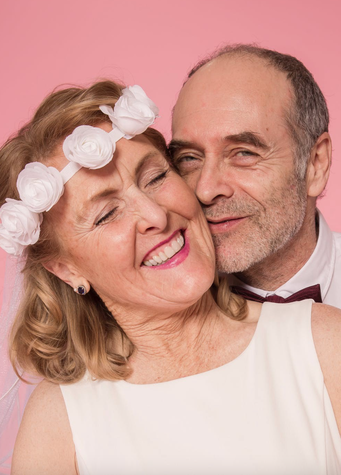 “Do you believe in same sex marriage?” a man was asked. “Of course I do,” he responded. “I have been married to the same woman for 40 years and we have been having the same sex for all of those years” This old joke takes on more significance as we age. Sexual desire, arousal, and performance are dependent upon levels of sexual hormones, primarily estrogen and progesterone in women and testosterone in men. It’s no secret that around middle age, these hormone levels begin to drop in both sexes. In men, after age 40, testosterone levels drop by 1–2% per year until age seventy, when the decline speeds up even faster. In women, the drop starts at around fifty. The hormones can be replaced; however, the degree to which this can restore a younger sex life is quite variable.

The three keys to successful sex are time, privacy, and energy. My wife and I are retired. Time: check. Privacy: kids are gone, one dog left; half a check. Energy: now that is a problem. Long gone are the days when we would have sex more than once a day. Now we are lucky if it is once a week, or even once a month. But we continue to soldier on.

Pills, creams, shots, and procedures may be expensive and not always reimbursed by insurance. Our minds may want to have sex, but the body eventually says, “Who are you kidding?” It is not uncommon that some time into our seventies or eighties, many couples will give up. Hopefully, this would be a kind and mutual decision. Cuddling, kissing, and frequent embracing are not hormone-dependent and can go some way in replacing the closeness that sexual intercourse produces. Oral sex can be just as satisfying for both men and women when penetration is impossible due to erectile dysfunction and or vaginal dryness.
Some couples report satisfactory sex lives into their eighties or nineties. I am a bit skeptical of self-reporting here. However, there is objective evidence to suggest that retirees are playing more than shuffleboard or pickleball in adult communities.

A study from 2018 reported that two-thirds of elderly people were “interested” in having sex. Not surprisingly, many more men than women responded with interest. Not far from me is the Villages. This adult community north of Orlando, Florida, has over 80,000 residents and a high rate of sexually transmitted disease. This largest gated retirement community in America is not content with giving up on sex for a round of golf.

In conclusion, sexual activity as we age is an individual and couples’ decision. Physical health, hormonal limitations, and desires usually dictate the degree, if any, of sexual activity. Older men are much more interested in sex than women. Age, in and of itself, does not preclude couples from having an active sex life.
​
David Mokotoff is a retired MD. Passionate about writing, reading, fishing, food, and health