Is 49 Too Old to Change Your Last Name?  By Tatyana Sussex

​I mocked late-marriers for taking their husbands' name — then I went and did it. 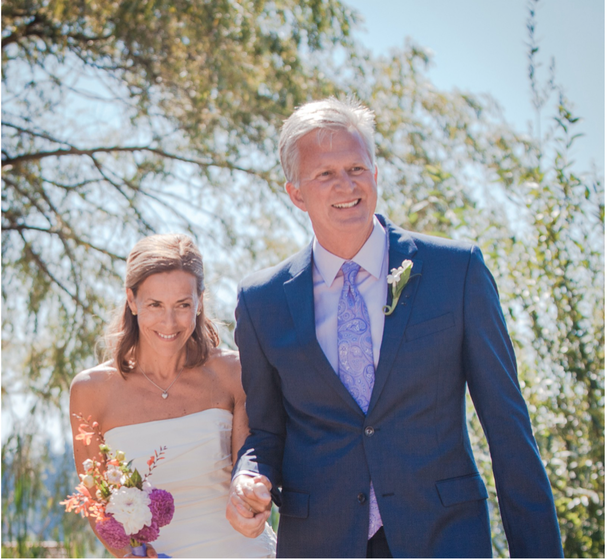 Photo from the author.
When my husband proposed to me, I was 49 and never married. He was 57 and a widower. While the content of our lives would fuse, mingle and blend, one thing would remain the same: my name.

I always thought there was something a bit mutton-dressed-up-as-lamb about a middle-aged woman who takes her husband’s name — like wearing a mini-skirt and pigtails at 50.

On more occasions than I care to admit, I was the wedding guest who rolled her eyes when the 40-year-old bride was presented with her husband’s last name. I’d knock my elbow into the arm of my best single girlfriend and whisper, “Isn’t it a bit late for that?”

When I informed Steve, my fiancé, of my plans to remain Tatyana Mishel he shrugged, “I figured.” Case closed.
A month before the wedding, in early July, Steve and I sat drinking coffee in the sun. Without looking up from his iPad my fiancé asked:  “When are you going to change your work email to Tatyana Sussex?”

At first, I was startled; then laughed it off. This was the man who also joked, “When are you going to ask the kids to call you Mom?” His kids were 28 and 30; his daughter was already married and a mother of two.

But there was something unexpected — a jolt of the giddies at hearing my future husband press his name into mine. The spell of “Tatyana Sussex” entered my nervous system and worked me for the rest of the day.

I stood my ground during the drive to work. How could I abandon a name that I liked, that fit me so well? This was the byline that had been in circulation for over 25 years, a global identifier that it was me who wrote that magazine article, the poem, short story or blog, and eventual book.

“Tatyana Sussex,” I whispered into my Mazda. It was a strange sound; not entirely bad. Still, the rules had been set and I had to follow them: A progressive Gen Xer keeps her last name, and that’s that.

Later that day, on a lunchtime walk past the houseboats of Eastlake, a Seattle neighborhood, I continued to reason with myself.

It would be respectful, decent even, to retain my last name because there already was a venerated Mrs. Sussex, the late wife and mother, who died of cancer three years previously. To honor her and keep myself in the good graces of my future stepkids, I would preserve her title.

Yes, I nodded resolutely as I passed the sprawling fig tree, dangling with gonad-y fruit. A vow was made: The next time I returned to pick these sun-ripened figs I would come as the married Tatyana No-Middle-Name Mishel, case closed.
During an afternoon coffee break in the office kitchen, one of my millennial colleagues stared me down and asked, “Are you changing your name or what?”

Five women under 30 turned my way. I paused. The sound of Steve saying, “Tatyana Sussex” echoed in my mind. I breathed in, and gave the spiel about being past that time of life when a name change makes sense, and then on to the point about the late Mrs. Sussex.

No one said a thing. In the quiet circle I was now the center of, time slowed. It was three o’clock. The sun held Seattle in its mother glow, streaming through the windows and warming the room. My young professional colleagues and their unlined foreheads would never ask each other about changing their names because of course they would (as it seemed to be done these days).

I saw something else in their expressions of wonder: they were either agreeing with me that yes, I was too old to change my name; or they had discovered how old I was — old enough to be their very young mother. So now they were both shocked to be working with someone as ancient as me, and jolted into a discovery that there were people like me (sociable, likable, spirited, reasonable looking) who got married this late in life for the first time — and please god don’t let it be them!

This collision of experiences and insights caught me off guard. I laughed until I snorted, until we all rushed back to our desks, where I started to question my stance. All this tired reasoning and explaining, all the rules — all made up by no one other than me.

By four o’clock I resorted to writing the name Tatyana Sussex in a notebook. I wrote the name in print, both upper case and lower. Next, I tried a signature. Going from a script capital “T” into Sussex was such a strange land of loop-de-loops. My pen felt like it was having a stroke in my fingers.

In the cheekiest move of the day, I wrote an email to Alison, my teammate and confidante — and 22 years younger. I signed it Tatyana Sussex.

A minute later, a reply: “I’ll get right on that Mrs. Sussex.”

Oh, how I thrilled at seeing myself attached to this new title of “Mrs.” I felt like the animal rights activist who inherits her grandmother’s rabbit fur stole and wears it in secret around the house.

I wanted to be called Mrs. Sussex from here on out and nothing else.

By the end-of-day, my position on changing my last name at forty-nine-and-three-quarters had softened like melting ice cream.

I inched my silver hatchback through rush-hour traffic, along the onramp to I-5 South, and gave myself an exercise:

Put aside whatever you think you should do; forget everything you vowed to do or not do to over the years, and see what you want to do.

Over my left shoulder, I tossed the name Tatyana Mishel into the air. I let it hover there as Lake Union spread out like a pool of glitter and downtown Seattle blinked in the sun. I registered the feeling; it was nothing special, a flat line. Yawn.
Next, I tossed Tatyana Sussex over my right shoulder, and let that name hang in the pale blue sky. I imagined this being my name going forward. I registered the feeling, which was delightful, like discovering a bright gem in my palm. My little soul engine revved. Do I dare?

“Tatyana Sussex” sounded fresh and fun. The Sussex family were happy people, so positive and hopeful and kind and open. All those “s’s” were slopes of joy dropped into my lifeline.

Tatyana Mishel felt like a horse that had been ridden into the dirt and godammit, it was a good ride but can you see in the old mare’s eyes how she was asking — begging — for you to put her down? “Take the other name, take it, just take it!” she was shouting.

By the time I was two cars away from fully merging, I was reciting: “Hi, I’m Tatyana Sussex.” I turned my head to the invisible drivers behind their darkened windows. “Tatyana Sussex,” I said to the Lexus that let me in. The name slid ticklishly from my tongue. I liked it. I wanted it.

Shedding Tatyana Mishel didn’t have to be such a big deal. Bylines, name recognition, too-old-to-change prejudices be damned, this shape-shifter was ready for something new!

My identity wasn’t lodged in my last name. Hell, Mishel was made up anyway, changed by my immigrant father during his opera singing career in his twenties — from Boris Bistritzky to Boris Mishel.

Why should I hold on to my last name if my dad could so readily ditch the legacy of his?

By the time I arrived home and kissed my future husband at the door, it was final. I was changing my last name. After August 10, I would be Tatyana Mishel Sussex, and that was that. Cased permanently closed.
​
And really: who better than a fifty-year-old woman to stride into society after all that independent living, with something new to call herself?