Grabbing My Boobs to Make A Point 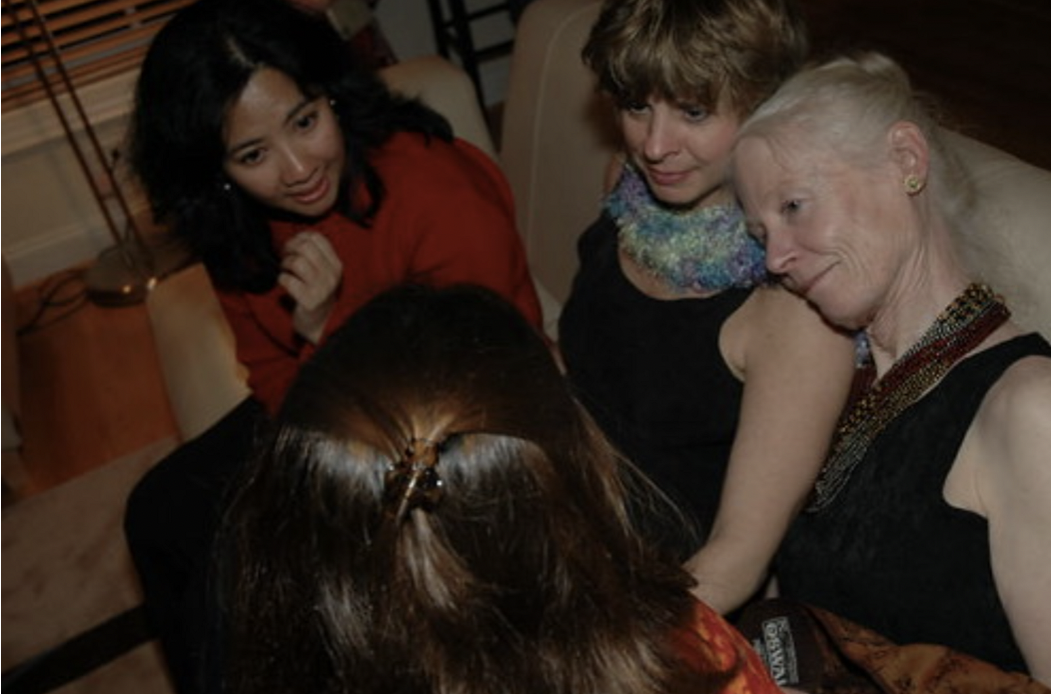 by Salem Elizabeth is licensed under CC BY-NC-SA 2.0
Last weekend, I went out with some girlfriends I’ve known since grad school, 25 years ago. While handing one of them my reading glasses, the other one said, “Oh my god. We’re at the age that we’re sharing reading glasses.”

“Are we?” I said. “That can’t be right.” But then I looked at my friend putting on my reading glasses, and we were.

“Oh, this is better,” she said, adjusting them. “Now I can actually see the menu.”

We’re also at the age when one of us has been talking too long, we’re allowed to call “My turn!” We were laughing so hard the couple next to us watched us instead of each other.

They were unapologetically looking over like we were the theater and they were the audience. I always feel bad for couples who can’t maintain a conversation on a date. I’d been there, forcibly trying to make a dull date interesting, miserably failing, deciding to barnacle on to the conversation nearby.

My friend, who was facing the couple head on said, “They started watching us when you grabbed your boobs to make a point.”

“Did I?” I asked. I couldn’t remember doing that, but that sounded like me.

My friends didn’t look any older to me than when I’d met them. That’s the grace of growing older with people you’ve known for decades. They’re frozen in time. They’re also using Botox and expensive face cream.

“What are you doing for your skin?” one of my friends asked. I’m the least fancy of the three. I’m probably wearing the same outfit I was wearing the last time we met up, and the time before that. I tried to recall what cream sat on my bathroom sink.

“Sometimes I put on that stuff — it’s in a white jar. It’s been around for decades. Our grandmas used it. What’s it called again? Oh, Pond’s. Sometimes I put on Pond’s.” They looked at me kindly and lovingly like, oh, you scrappy little monkey.

“What about you guys?” I asked. This conversation comes up a lot more than when I was younger. It has replaced sex and mothers, and drama.

“I tried Botox once,” my friend with the beautiful pale Irish skin said. “But it made my eyes look weird and it changed my smile. I never went back. I like my smile.”

I took in her sweet smile, which had always been playful and sugary. She’d either be cast as a sociopathic villain or America’s sweetheart in a movie. I could see why she felt protective of it.

“What about you?” I asked the shiniest of the three of us. “What’s your skincare regimen?”

“I get Botox every four weeks,” she said, definitively, like this is not open for debate or conversation. Don’t judge. It’s part of my life. The end.

I looked closer at her face. She did look younger than the last time I saw her. She looked younger than all of us. Time did seem to be working backward in her favor. She was the only one of us who still got carded.

Whenever someone tells me they use Botox, I think about the expose I saw about a couple who received bad Botox and ended up paralyzed. That was the end of any Botox fantasy for me.

One of us mentioned taking a selfie when the evening came to a close. I always felt like a Macy's Day Parade balloon version of myself in selfies, so I generally avoided them.

I once read an article called “How to take a good selfie” to combat this phenomenon. It said, don’t be in front, don’t wear white, don’t show a lot of skin. It never worked. I always ended up in front, wearing a big white t-shirt with my arms taking over 1/3 of the photo.

We all tried to mush in the photo, but none of us were satisfied with our positioning. We all looked like we were trying to squeeze our heads and bodies into a shoebox.

“Let’s ask the waiter to take it,” my sweet-smiled friend suggested. We communally exhaled.

“How many do you want?” the waiter asked.

​Later, when I looked at them, I realized we all did look the same as we did 25 years ago. Maybe even better, and it wasn’t the Pond’s or the Botox. It was that we were all still here.