Confessions of a Mature Belly Dancer

I just want to dance and have a good time.
By Meryl Baer

My dance saga begins at the tender age of four. My mother enrolled me in a ballet class, and like millions of girls before and after me, I spent an hour a week pirouetting and spinning. There was a recital at the end of the year.

Imagine a line of a dozen four- and five-year-old girls struggling to dance together. Perhaps you have suffered through the spectator experience. It can be long and wearying, the doors of the auditorium protected by stern-looking parents should you wish to leave following your performer’s routine. My mother does not tire of regaling folks about my first show. (I do not remember anything about the dance classes or the program.) She laughed so hard she peed in her pants. Need I say more?

That was my first and last public appearance as a dancer for decades.

I was not the athletic type, and by the tail end of my twenties realized I needed to exercise. Regularly. I decided to take a class at a local recreational center. Belly dancing sounded fun. We danced around the gym, swaying and shimmying -- what a great way to spend an hour a week, exercise, meet folks and socialize!

Life eventually got in the way and belly dancing lost out. Children, work, family, my belly dancing teacher got divorced and moved away -- for all these reasons and probably more I don’t remember, dancing was tossed aside.

Fast-forward three decades. A friend of mine was taking belly dancing and urged me to join her class. As my body aged and the moans, groans and morning stiffness set in, I knew something had to be done.

I renewed my love of the dance. I moved my hips, shoulders, chest and other parts. I learned to shimmy again. My waist, along with other body parts, was now well hidden and the extra pounds did not make dancing effortless.

Then my husband and I relocated to another state. Among my priorities was finding a belly dance class, and, eventually, I found one in a nearby town.

The experience began as another fun exercise class, but morphed into a small group of occasional performers. I am not quite sure how it happened. We performed at the end of the year in the school’s recital -- the only adult class in the show. I did not know anyone, so I had no qualms about dancing in public. I could have fun, make a fool of myself and nobody (who knew me) would know.

Then a couple of ‘gigs’ came along. My instructor was asked to dance along with her students -- now her troupe -- at an assisted living center. Again it was fun and not stressful; the folks enjoyed the entertainment. I knew no one. I don’t think the oldsters cared that I did not have a dancer’s tall, slim, sexy, young, smooth, taut body. My body is short, round, soft (OK, maybe flabby is the right word), beginning to wrinkle — a mature figure resembling a grandmother rather than a dancer of any kind. 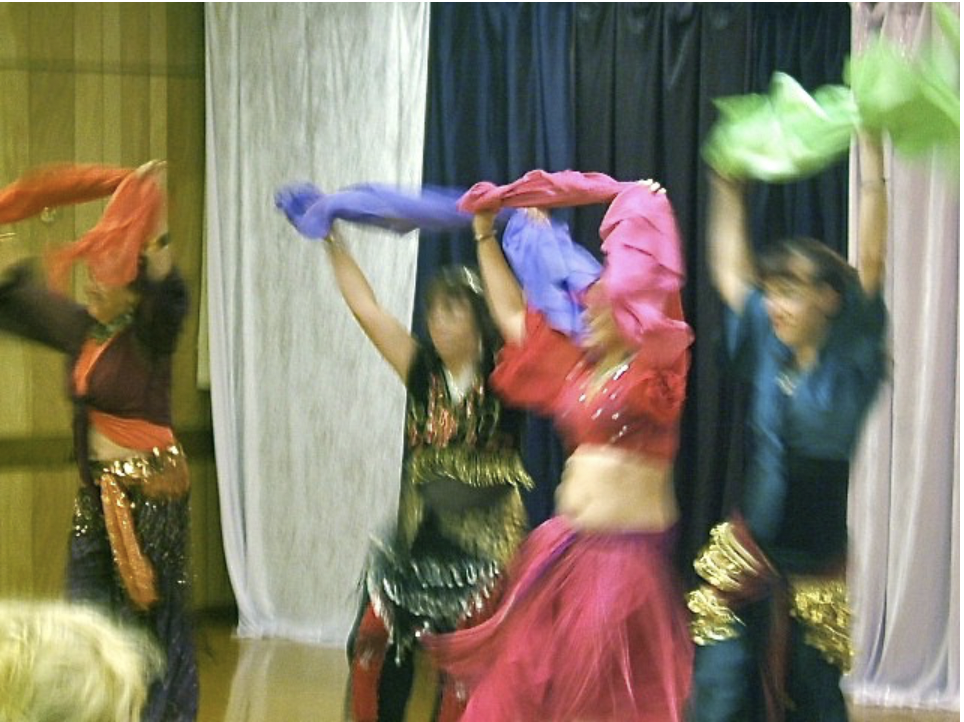 My group performing. Photo by Steven Baer
Belly dancing costumes are revealing. Middle Eastern belly dancers, depending on their country of origin, may or may not reveal their midsection and more. My costume covers my midsection. I love veil work — the veil can be draped over the body to conceal a multitude of sins (brownies, ice cream, chocolate chip cookies, etc.). Three troupe members are in their thirties. They can bare their midsection with pride. Their bodies don’t mind gracefully sinking to the floor. My descent is not exactly elegant. A couple of the other participants are older but not yet seniors.
I am not sure how long I can dance with the youngsters (relatively speaking). I would gladly join a seniors class, but one doesn’t exist in my area. I just want to dance and have a good time. Vive belly dancing!